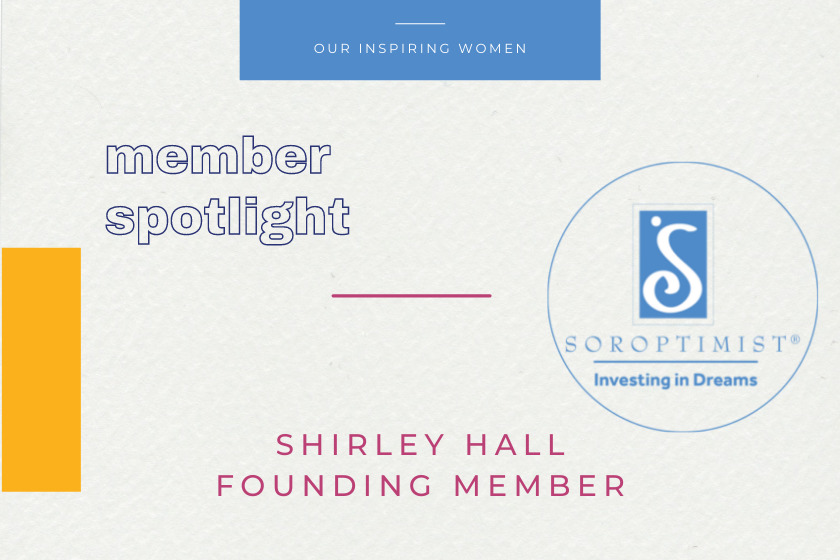 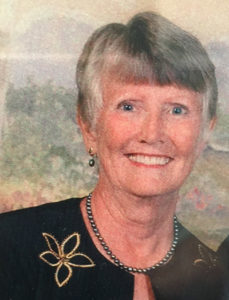 We are starting a new feature where we spotlight member stories! For our inaugural spotlight, we are featuring one of our founding members, Shirley Hall.

Shirley Hall Grew up in Asheville, NC, the middle child of 3. Her parents divorced when she was 14. Her Dad remarried immediately, leaving her mom alone to raise 3 kids on a farm -they were poor!

Her mom’s goal was to keep family together no matter what, and though there was never extra money for anything, there was love in the home. Shirley’s mom was very resourceful in getting the family what they needed; she traded eggs for piano lessons.

As a senior in high school, Shirley had already weighed her options and realized she needed to prepare for a secretarial job because there was no money for college. She took typing, bookkeeping, shorthand and secretarial science classes, and when the Navy came to her high school to recruit and test women for navy jobs in DC, Shirley got a job. Her older sister was already in DC, working for the Navy, but Shirley too young to live on her own and her sister was too young to be her guardian. She lived with an aunt and uncle until her sister turned 21, and then lived with her. Her sister eventually married a Navy man, who introduce Shirley to the man who would become her husband.

Cindy Manarin, a friend from church, introduced Shirley to “venture club” in DC -venture club was the junior level of Soroptimist where secretaries, nurses and teachers could join. At that time, women had to be “professionals”: own their own Business or be a business manager in order to join Soroptimist. Additionally, only one woman in each accepted field was allowed in these original Soroptimist Clubs. The rule eventually changed to allow for “non-professional” women, but little did Shirley know at the time she joined Venture Club that the seeds were being sown for SIR!

The DC Venture Club focused on children, and projects included making lunch for inner city kids and their moms. A Soroptimist sister had a catering business and made ground ham which they served on hot dog buns. The children loved it! They also set up a library for kids at an inner-city summer camp. Soroptimist venture club also participated in a project with the Red Cross at Bethesda Naval Hospital where they danced with mental patients! Shirley remembers that the patients loved the music and the one on one contact with volunteers.

Shirley worked for the Department of the Navy upon arrival in Washington. She was promoted to the Office of Counsel for the department but was soon bored because there was not enough work to keep her busy. She worked for two litigators, and told the senior attorney she was applying for a job in private industry. She was hired by IBM in 1958 into their “Navy Program” and was later promoted to the Federal Systems Division President’s Secretary position, in Rockville, Maryland.

Shirley married John in 1961. He was at the time a lieutenant with the Navy in double hazard duty: diving hard hat and working with bombs under water. Shirley requested a transfer back to Washington because the family needed to live in Maryland south of Washington since John was stationed further south in Maryland. In 1963, first son Joey was born. IBM asked Shirley to come back to work as soon as possible. After a year break, a neighbor agreed to watch Joey so she could go back to work. The couple were saving money to buy their first house. Second child David was born in 1966 and Shirley didn’t go back to IBM for many years. By then, John had gotten out of the Navy because of the double hazardous assignment, and he was hired by IBM and later promoted to IBM Raleigh. Shirley also transferred to IBM Raleigh, and while working there had a mentor who was the personnel manager- he really believed in her and always pushed her to do more than she thought she was capable of. Shirley ended up heading the personnel department for IBM in RTP-She was doing ALL the jobs- of course! When she eventually retired from IBM at 55, she had worked there for a total of 19 years. In the years 1974-1976, they lived inTehran, Iran, which definitely strengthened Shirley’s views on roles of women in society.

The inception of Soroptimist Raleigh came in 1987 when old friend Cindy Manarin, who was by that time regional Governor for Soroptimist, asked Shirley to charter a Raleigh club. Shirley’s job IBM job in Raleigh finally made her eligible for classification as “professional woman”. Shirley’s early exposure to financial hardship, fulfillment in giving back to community and wanting more for women in general made this an easy decision. They brought in Dr Ruby Barnes, a nursing phd, retired, and Betty Roberts, regional president from Asheville, to Raleigh to meet and to form the club. They Needed 18 members to charter the club, and because of Shirley’s connection to IBM, the original club had lots of members from IBM! In the early days, they used to have meetings at the K&W at North Hills. The first SIR LYD award went to a nurse – it was for $500.

Soroptimist used to have a list of required projects – Committees presented ideas for service projects and fundraisers and the club approved them. Shirley remembers an environmental project where the ladies cleaned up a road. They also sold Cokes at the fair to benefit Duke Children’s Hospital.

The Closet was one of SIR projects to help women prepare for job interviews-it later became an independent spinoff called Dress For Success. SIR is still in close partnership with them. Our LYD recipients 2022 have already gotten professional clothing and headshots from Dress for Success!

Besides Shirley, Linda Drummond is the only other charter member remaining today. Diane Cardamone is also an original member, but she took a break to raise her kids. Donna Masterson, Pat Lynch and Sarita Harkness(member in Panama first) are also longtimers.

Shirley is proud of transcending an upbringing of financial hardship to create a wonderful family with a loving husband and two successful sons, both lawyers. She is also proud of helping create SIR to uplift and help other women live their dreams!